Simon Malmenvall was born in 1991 in Triest (Italy). In 2012 Malmenvall graduated in history and Russian studies at the Faculty of Arts within the University of Ljubljana. In 2014 he concluded his graduate studies with a master degree in history at the mentioned faculty. In the same year he received the Student Prešeren Award of the Faculty of Arts for his master thesis on the relations between Kievan Rus’ and Byzantium. In 2018 he obtained a doctoral degree in theology at the Faculty of Theology within the University of Ljubljana. In 2019 he completed the state qualifying examination in librarianship at the National and University Library of Slovenia.

From 2009 Malmenvall published over one hundred scientific works (articles, book chapters, etc.) and translations in the field of cultural and ecclesiastical history, philosophy, ecumenical theology, ecclesiology, and history of literature. His main research interest is history and theological thought of the East Christendom and Catholic-East Orthodox relations. He is the author of the scientific monograph Culture of Kievan Rus’ and Christian Historical Consciousness (2019, published by the Faculty of Theology). He was one of the contributors preparing the first Slovene edition (2015) of the main East Slavic medieval source, chronicle Tale of Bygone Years, and the first Slovene edition (2019) of other representative East Slavic texts from the eleventh century (both editions were published by the Department of Slavic Studies at the Faculty of Arts). He is the editor-in-chief of the journal Res novae (published by the Faculty of Law and Business Studies), member of the editorial board of the journal School Chronicle (published by the Museum of Education and Pedagogics of Slovenia), member of the editorial board of the journal Galychyna (published by the Precarpathian National University of Vasyl Stefanik, Ivano-Frankivsk, Ukraine), and member of the editorial board of the journal Edinost in dialog (published by the Faculty of Theology, University of Ljubljana). He is also engaged as terminological consultant for theology in the process of preparing the new dictionary of the Slovene language at the Institute of Slovene Language, Research Center of the Slovene Academy of Science and Arts. In 2018 he received the prestigious Solemn Charter for Young University Teachers and University Associates awarded by the University of Ljubljana. In 2020 he received the prestigious international Danubius Young Scientist Award granted by the Austrian Federal Ministry for Education, Science and Research in collaboration with the Joint Research Center of the European Commission for extraordinary achievements in scientific activity and output in relation to the Danube Region. He translated into Slovene language (2019, first volume; 2020, second volume; published by the Cultural and Art Society Logos) the monumental work Ways of Russian Theology (1937) written by the Russian East Orthodox theologian and historian Georges Florovsky. He was a co-translator preparing the first Slovene edition of the Selected Philosophical Works of Vladimir Solovyov (2019, published by the Cultural and Art Society Logos). 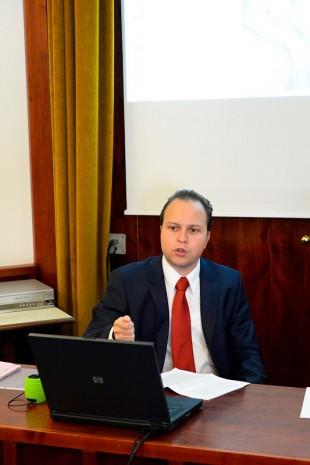