Notes: This is a digitalized version of an unpublished and to historiography almost unknown political science study of Borut Bober (pseudonym), most probably Dr Ciril Žebot (1914–1989) and his anonymous colleagues from the Akademski klub Straža (Straža Academic Club). The text was completed in 1943 and bears the title “Narod sredi Evrope – razprava o srednjeevropskem vprašanju s posebnim ozirom na Slovence”. Ciril Žebot, a lawyer and university professor of political economics, active in the United States of America after the Second World War, is considered one of the first advocates of the independent state of Slovenians. He introduced his life and socio-political views in detail in his monograph titled “Neminljiva Slovenija” (Celovec, 1988). His dissertation “Narod sredi Evrope” includes the first more comprehensive argument for Slovenia outside the framework of Yugoslavia, at that time an avant-garde and rare idea. The author refers to the intellectual heritage of the priest, university professor of theology and political worker Lambert Ehrlich (1878–1942), with the presentation of the uniqueness of the Slovenian nation as the contact point between the Romanic, Germanic, and Slavic worlds. In the context of the fragmentation of the Slovenian territory during the war, he suggests collaboration with western allies and simultaneous anti-Communist mien and perceives the war as an opportunity for the (gradual) formation of an independent Slovenia.

The complete document in digital form is available HERE.
First page of the dissertation “Nation in the Middle of Europe” 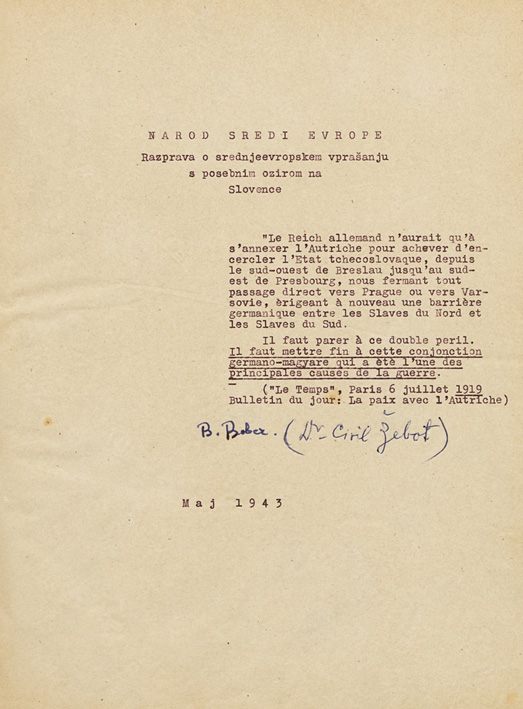