Notes: The comprehensive and analytically cogent Memories and Reminiscences by Matija Škerbec (1886–1963), a priest, long-standing dean in Kranj, social activist, founder of industrial-artisan cooperatives and political emigrant, are among the most valuable Slovenian 20th-century memoirs with a social engagement component but have not been published officially in their time due to turbulent historical circumstances. They feature Škerbec’s personal evaluation of events and processes that he witnessed or participated in, with a focus on the political decisions of the Slovenian Catholic camp between the last years of the Austro-Hungarian monarchy and the end of the Second World War. His discussion covers contemporary social issues, the actions of the Slovenian People’s Party, the Slovenian national thought, a year of political imprisonment (1933–1934) for anti-Yugoslav sentiment during King Alexander’s dictatorship, the German occupation, post-war refugee life in Austria and arrival to the United States of America. Throughout the text, Škerbec expresses a decisive Slovenian autonomistic, anti-invader and anti-communist stance. The personal and ideological profile of the author in question deviates from most of the Catholic social activists of the time as he was still inspired by the national and religious spirit of late imperial Austria.

The complete document in digital form is available HERE.

A summary of the document (in Slovenian) is available HERE.
The first page of Škerbec’s Memories and Reminiscences. 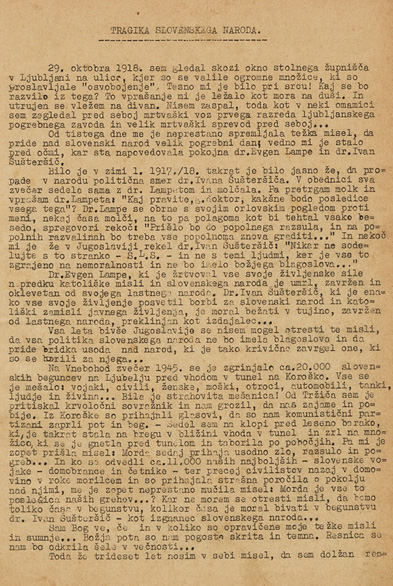